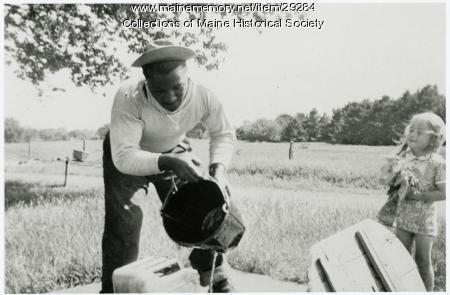 Cpl. Eugene Edey, a soldier from New York City, filled an army can with water from a well on the front lawn of the Atkins farm on North Road in North Yarmouth in 1942. Claudia Atkins, daughter of the farmers, watched.

Edey was with a unit of black soldiers from the Second Battalion of the 366th Infantry who were stationed at Dunns' Corner section of North Yarmouth and charged with guarding the Royal River Grand Trunk Railroad Bridge, which provided an important connection between Maine and Canada.