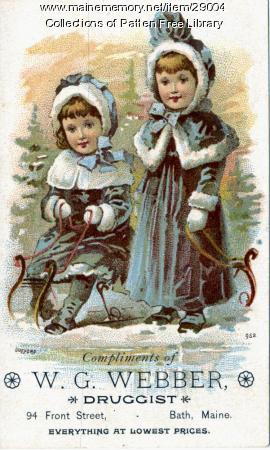 Walter G. Webber (1848-1906), a prominent druggist in Bath, owned Webber's Drugstore from 1875-1906. From 1875 to 1883, his first store was located on the east side of Front St., opposite Elm St. For the next 50 years, Webber's Drugstore was located in the Union Block, at 94 Front Street. At that location, the store was damaged by the disastrous fire of 1894 that destroyed the Sagadahock House just to the south on the same side of Front Street. After Walter Webber's death in 1906, the business was managed by Walter's estate until the business was purchased by Merton Webber (no known relation to Walter Webber) in 1912. The business remained at 94 Front Street until 1933, when Merton Webber moved the store to 194 Front Street, going out of business permanently in 1939.