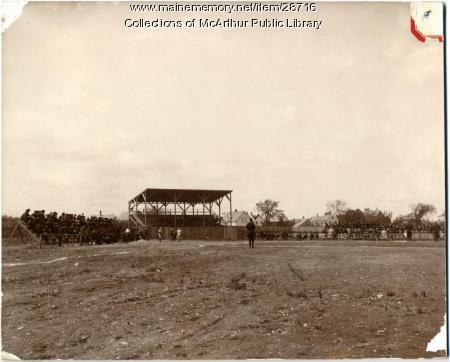 An unidentified baseball team at play in Prospect Park, Biddeford.

Upon very close inspection at the far left and far right of the roofed stands, there is seating for the crowd cheering on their teams. Most of the audience are men, but there is an occasional woman present. Right of the roofed stand are the score keepers. There are regulation umpires, game members, chalk marking the field, and sand bags for the four bases.

At this period of baseball there were the St. Louis Perfectos, the Americans and the White Sox teams playing and Freddy Parent from Biddeford was a Major League Player for the Perfectos. Parent made his debut July 14, 1899, at the age of 23. This was also the era when Louis Soxalexis played.