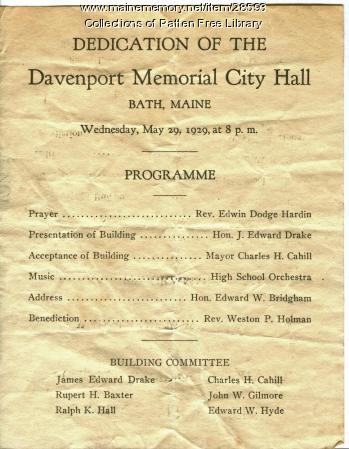 This paper details the program for the Dedication of Bath's new City Hall on May 29, 1929 at 8 p.m. The building committee that had shepherded the structure from the acceptance of George Patten Davenport's gift to completion, are listed here: James Edward Drake, the chairman of the committee and former mayor; City Clerk John W. Gilmore; the City Treasurer Ralph K. Hall; Mayor Charles H. Cahill; and former City Council members Rupert H. Baxter and Edward W. Hyde. The minister from the Winter Street Congregational Church, Edwin D. Hardin offered the opening prayer, while the closing benediction came from the Rev. Weston P. Holman of the Beacon Street Methodist Church. It is this latter church where George P. Davenport was the organist for many years. The attorney and school-board member Edward W. Bridgham offered the address after music provided by the Morse High School Orchestra.
The new structure provided modern spaces for a variety of civic functions, including: the city prison; offices of the City Clerk, City Treasurer and City Marshall; the courtroom for the Municipal Court; quarters for the City Council and Mayor; an office for the Davenport Fund trustees; workspaces for the Superintendent of Schools, Board of Assessors, the Department of Public Works; and a large public auditorium.