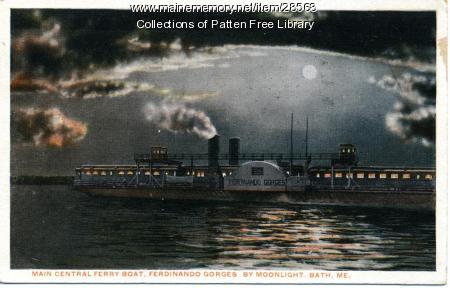 This romanticized look at the Ferdinando Gorges ferry was featured on a postcard postmarked June 1916, sent by "Aunt Sylvia" to Cecil V. Stevens in Five Islands, Maine.

Aunt Sylvia noted that she was going to work at the Columbia Hotel on Front Street, beginning in the next week, and would receive $5 a week.

According to Ralph L. Snow's "Bath Iron Works: The First Hundred Years," the contract with BIW for the Ferdinando Gorges was signed in July of 1908 and delivered in May of 1909. The Gorges was a modern, steel, specialized vessel that could hold nine passenger cars or 15 ordinary freight cars on three sets of tracks.

She worked the Kennebec daily until the opening of the Carlton Bridge to rail traffic in October of 1927 made the ferry redundant.

Maine Central Railroad sold the Ferdinando Gorges to the Hudson River Navigation Corp. of New York for $50,000. There, renamed the Pioneer, she worked until 1940 when the ferry was scrapped.

Ferdinando Gorges (1565-1647) was interested in the development of the New World, but from a safe distance in England. He helped finance the Popham Colony of 1606 and in 1622 received a land patent for the Province of Maine.