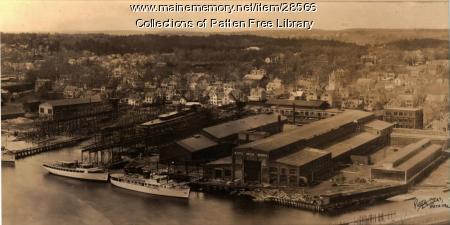 This black-and-white photograph of Bath Iron Works on the western edge of the Kennebec River and the yachts under construction in the spring of 1931 was likely taken from the nearly new Carlton Bridge.

This was an important period in the reestablishment of the shipyard after Bath Iron Works went into receivership in 1925. At that time the assets of the business were broken up and sold at public auction.

In 1927, a former long-time employee, William Stark Newell, "Pete," initiated the reorganization of the shipyard as Bath Iron Works Corporation. During this difficult time of nationwide economic depression, one type of construction that Newell pursued successfully was the building of yachts.

Among the yachts seen here, from left to right, are the Aletes, the Halonia, the Seapine, and the Caroline on the ways. The Caroline was the second-largest yacht constructed by BIW, as discussed by Ralph Linwood Snow in his "Bath Iron Works: The First 100 Years." The luxury yacht was to be a multipurpose vessel, and carry a scientific expedition to Easter Island. Not planned was the conversion of the Caroline during World War II. Renamed the Hilo, she was used as a motor torpedo tender. The Seapine, originally constructed for Frank Goodyear, was also re-named and reused during the war. This 154-foot yacht became the USS Rhodolite and served as an inshore patrol vessel, inter-island convoy escort, and weather vessel in the Hawaiian islands.