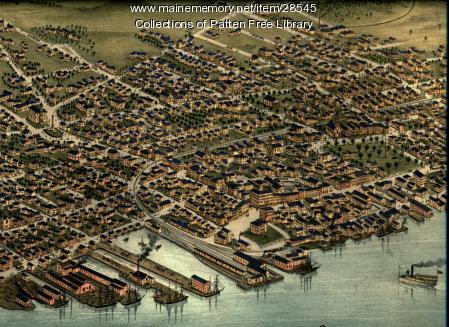 The bird's-eye map, like this one made of Bath in 1878, was a very popular view of American cities in the nineteenth century. The maps both offered information and promoted the city as an attractive and prosperous location. This detail, published by J. J. Stoner in Madison, Wisconsin and printed by Shober and Carqueville of Chicago, showed a thriving city built on the profits of the 1850s wooden shipbuilding boom. Even the shoreline was evolving, as land was created by fill along the edge of the Kennebec River. Commercial Street, seen next to the water on the right, was once such street, built on land filled in between the wharves.