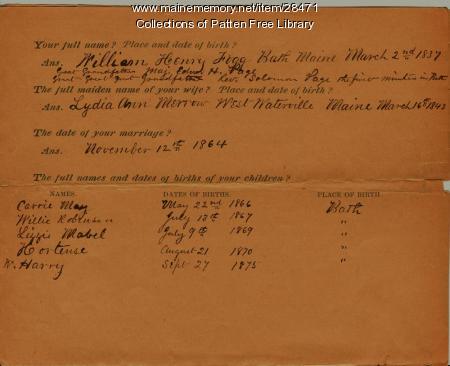 This family-history sheet, completed for the Sagadahock Historical Society near the end of the 19th century by William H. Fogg, was made more significant by Fogg's addition of his poetic synopsis of his Civil War experiences, primarily in Libby Prison in Richmond, Virginia.

Besides a description of his participation in the War of the Rebellion, Fogg wrote of the deprivation at the prison and the methods the prisoners used to pass the time. Of particular note, the references to Neal Dow, an important figure in Maine politics and the temperance movement, recounted Dow's swift shift from providing current war news to a canned temperance lecture.

He ended his discussion with, "Tongues cannot tell neither can imagination picture what we suffered bodily and mentally."

William Henry Fogg was born in Bath in 1837, the son of Robinson Fogg and his wife Caroline Page Fogg. W.H. Fogg was the only child of the 13 children born to the couple who survived longer than his mother and that was only by some two weeks in May of 1902.

He married Lydia Ann Merrow in 1864, during his service in the Civil War. Fogg had a clothing store in Bath after the war until 1888, when he moved to Portland.