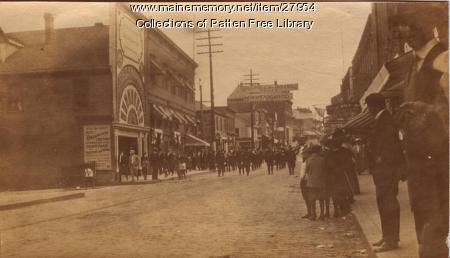 This is the earliest photograph of the Dreamland Theatre in Bath known at this time (2009). The unknown photographer sought to capture the oncoming parade, but depicted, in addition on the left or east side of Front Street, the theatre that opened to much fanfare on June 14, 1909.

As the "Bath Daily Times" of the time described the building, the pre-existing wooden building had been adapted with a new ventilation system, a projection booth in a fireproof steel and asbestos room, electrical wiring safely encased in iron pipes, and an audience house with a height of 24 feet, featuring both walls and ceilings covered with decorated steel. Fire was an ever-present danger in most downtowns and particularly in this entertainment industry. As the newspaper continued, "The outside front of the building will have one of the finest steel and electrical decorations of any theatre in New England." However, as the photograph demonstrates, this beautiful facade was only "skin deep," since it was a standard gable-front-facing structure with a false front. This facade allowed a bigger and more enticing street presence for the vaudeville and moving-picture entertainment palace and continued the height line of the neighboring Columbia Hotel.

A sign on the side of the building described the different types of shows that would be appearing in the "New Dreamland Theatre," an arrangement that existed from 1909 until November of 1913, as noted in a 2009 edition of "The Times of Bath" on local theaters by Kerry E. Nelson. The front of the building itself has worked into the surface ornamentation the information that the three daily shows cost only a dime.