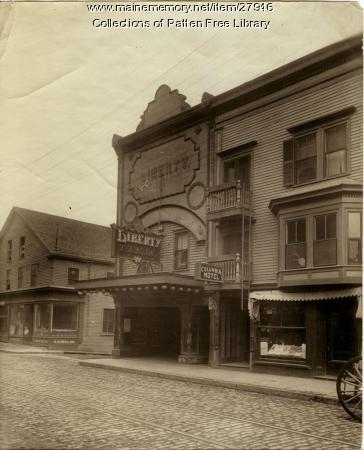 The Liberty Theatre in Bath, apparently closed or shortly to be so. The theatre had been the Dreamland, which opened in 1909.

Revamped, the theater reopened in 1919 as the Liberty, a name reflecting recent world events and trends. It was run by Bath Theatres, Inc., a business that owned other entertainment venues in the city, including the Opera House, the Columbia Theatre, and the Arcade Dance Hall.

Alfred S. Black of Rockland was president and treasurer of the business, although William and Charlotte O'Brien, who ran the Columbian Hotel next door, maintained ownership of the property itself.

Despite the run-down visual character of the theater in this photograph, one can see the changes that the new management had made to the external facade. Part of the false front that had declared the theater to be the Dreamland has been removed to reveal the windows of the original building.

An electrified, elaborately shaped marquee with the name of the Liberty has been added, as had a lighted canopy to protect the moviegoers from the elements. Improvements added to the hotel since the 1915 fire, include the bay window and, more importantly, the fire escape from the second and third floors in the area right next to the theater.

The theater closed in 1923, probably a victim of the larger screen and seating capacity of the Bath Opera House.