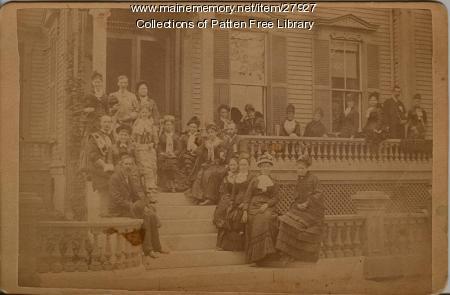 Galen C. Moses (1835-1915), seated at the bottom of the steps on the left, and friends at his home on Washington Street in Bath. The Italianate building was designed by Bath architect Francis H. Fassett and remodeled in the Queen Anne style in 1901 by architect John Calvin Stevens.

Galen's father Oliver and uncle William built several structures in the central business district in the mid-19th century. After their deaths, Galen, the manager of the Sagadahock Real Estate Association, took control of those structures and increased the family's holdings. By the end of 1891 the association owned fifteen buildings in the compact downtown.

A Bath native and graduate of Bowdoin College, Galen served as editor of the Bath Eastern Times, secretary to the Bath Mutual Marine Insurance Company, partner in a wholesale business of food provisions, and was involved in the woolen mills of Worumbo Manufacturing Co. He was the president of many local institutions, including the First National Bank of Bath and the New England Shipbuilding Company.

Galen is best remembered for his philanthropic support for the Patten Free Library, the YMCA, the Maine Missionary Society and the Old Ladies' Home. Significant financial difficulties for Moses in 1898 led him to resign from his business posts, and though he was legally free from the obligation to repay his creditors, Galen Moses regained his fortune and repaid all of his previous obligations while continuing his charitable gifts.