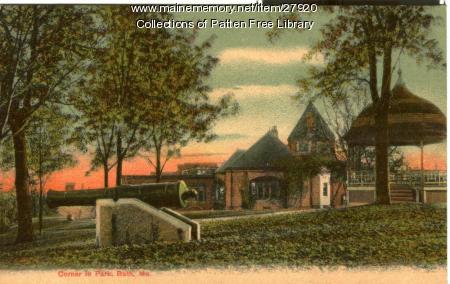 This unused, undivided-back, color-lithograph postcard was printed in Germany under G.W. Morris, Portland, Maine publishers. The Patten Free Library is in the background, but in the foreground is the 1883 Bandstand designed by Francis Fassett and a British Royal Navy cannon. Fassett was born and raised in Bath, but his career took him to Portland in the mid 1860s where he furthered his reputation as an architect. Fassett is considered one of the most important architects in the state in the nineteenth century. As the "Bath Daily Times" of September 1883 described the octagonal shape as accommodating 56 musicians and painted by George W. Hall and William M. Mains in the vibrant Queen-Anne colors of the period--light red, olive green, sky blue, French vermillion, tan, red and black walnut. The cannon appears to have been cast at the Willey Furnace in England in the 1740s and then installed upon the H.M.S. Somerset in 1748. This vessel was wrecked off Cape Cod in 1778. The nine pounder then came through a circuitous route to Bath, where it found a home in the park in the nineteenth century. The design of the larger park itself was influenced strongly by the Superintendent of Cemeteries in Bath, John H. Ramsey.