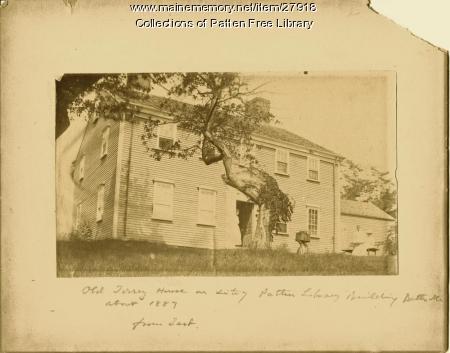 This photograph captured the "Old Torrey House," one of several nineteenth-century properties and structures in the block defined by Linden, Summer, Washington, and Front Streets.

The Torrey property corresponds to the site of the current Patten Free Library at the southeast corner of the block that became the City Park in the 1880s. Since William Torrey (1785-1867) had moved to Bath by the time of his first child's birth in 1811 and he also appears on the 1814 Tax Roll of Real Estate as owning a home, the photographed structure may well be that house.

According to a June 1889 news article, the Torrey house was built circa 1780 by William Webb (1764-1822), a Collector of Customs and William Torrey's father-in-law.The simple two-and-one-half story structure with a Federal-style doorway remained in the Torrey family until the home and property were purchased by the City of Bath in 1889, to make way for the Patten Free Library.

A Bath Daily Times article of March 13, 1922 noted that another Bath newspaper publisher, Charles D. Clarke of the Bath Independent, worked vigorously to assist in the raising of the $3500 to purchase the property and $1000 to grade the land.

Galen Moses was largely responsible for the construction costs of the new 1889-90 Richardsonian Romanesque building to house the Patten Free Library.