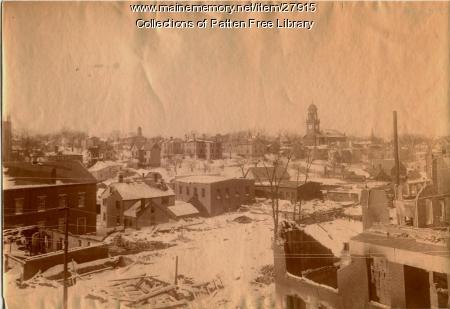 On January 27, 1894, a fire began in Bath in a stable belonging to the Sagadahock House and spread quickly to buildings and businesses at the corner of Front and Centre streets. The fire could have been stopped but no water was available because of a break in the water pipe between the New Meadows River and Bath.

The fire spread down Front and Centre streets on the western and northern sides of the streets, and the heat and flying embers also severely damaged buildings on the opposite sides. Despite the best efforts of firemen from Bath, Brunswick, Portland, and Lewiston, over $200,000 of downtown property was destroyed, and more than 47 business were affected.

As noted in the Bath Independent, "Included is this area is a pretty big slice of the business locality, all bricks and mortar, cinders and smoke, a melancholy monument to the glory of past city governments of Bath and the Bath water works." While new buildings quickly replaced the destroyed properties, the downtown was changed forever. Still standing is the original Bath City Hall, largely untouched on the left, and Bath Iron Works, just north of City Hall on Water Street.