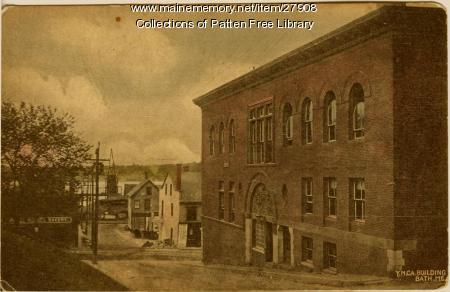 A photographic postcard looking east on Summer Street toward the Kennebec River in Bath, with the YMCA on the right. This building is part of the Columbian Block, built in 1894 and designed by John Calvin Stevens to complement its neighbor, the Patten Free Library. The arched windows and entrance, as well as the grouped windows, are hallmarks of the Richardsonian Romanesque style of architecture.

The photograph also shows Summer Street's approach to the river. At the corner of Summer and Front Streets is the bakery of Fred C. Leonard, the brother of E. Randall Leonard, whose drugstore was opposite the bakery. Also visible is the carriage-smith shop of Charles W. Dunning on Summer and a building on Commercial Street occupied by both Elmer F. Campbell cabinetry and Louis N. Hart's restaurant. In the distance is the Henry W. Howard Coal & Wood yard, with a triangular structure for the unloading and loading of coal and wood from the Kennebec River.