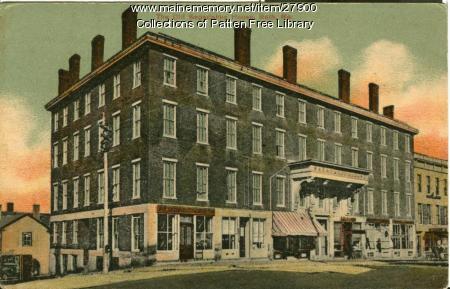 The Sagadahock House in Bath in 1894, which had been gone for at least fifteen years when this postcard was produced. The colorized photograph appears to use most of an 1894 photograph taken days before the January fire destroyed the 1849 Greek Revival structure and many of its neighbors. A small fire in the stable of the hotel became an unmanageable "fire fiend," as labeled by the Bath Independent, because of a non-functioning water supply.

The 80-room hotel at the northwestern corner of Front and Centre Streets and built by two ship-building families, the Pattens and Houghtons, was in its day the largest brick building in Bath. Shipbuilding was booming in Bath, and John Patten wanted to build a modern hotel in keeping with recent prosperity. The the first train of the Portland & Kennebec Railroad to arrive in Bath came for the hotel's opening, a particularly festive Fourth of July. Among the guests that stayed here were Jefferson Davis, not yet the president of the Confederate States of America.