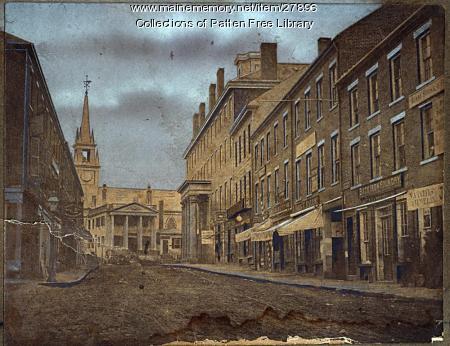 A hand-colored, mounted photograph of Front Street in Bath prior to July of 1859, probably printed around 1900. This picture captures Front Street in the 1850s when Bath was in the forefront of the shipbuilding industry nationally and expanding rapidly. The oldest section of the downtown, which remains today, is in the right foreground, the brick buildings of Merchants' Row built from 1832 into the early 1840s. The four-story building is the Sagadahock House, built in 1849 and destroyed by fire in 1894. The removal of the portico columns in July of 1859 help date this early photograph. Beyond that is William King's Bank, the first brick building in the downtown and built in the early 1810s only to be replaced in the 1870s. And just behind King's building is the Universalist Church built in 1838, designed and constructed by master builder Anthony Coombs Raymond. This image is the only known photograph of the church. Raymond, a student of Samuel Melcher of Brunswick, developed these same forms and decorative motifs five years years later when he built Winter Street Church for the Congregationalists. The Universalist Church was dismantled in the early 1860s to make way for a commercial structure that became known as the Church Block.