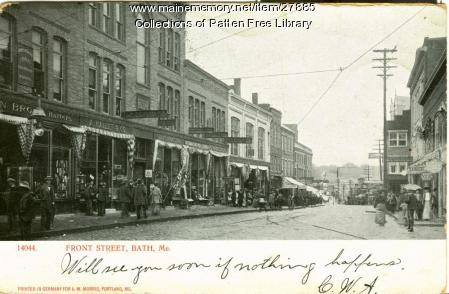 This undivided-back postcard with its black-and-white photograph was mailed to Miss A. Townsend in Quincy, Massachusetts on August 17, 1905, from "C.W.A." The image, photographed from near the intersection of Front and Centre Streets, looking north on Front, captured a bustling downtown. On the left or west side of the street, in the foreground, was the Sagadahock Block, constructed immediately after the 1894 fire that destroyed the 1849 Sagadahock House on this site. Another structure to the north or right finished in a lighter color also dated from this same destructive event and the rebuilding that followed. Both were designed by John Calvin Stevens, the noted Maine architect. Many of the businesses established in those original structures returned to the same geographical location in the new building, such as Hallet's drugstore, John O. Shaw's stationery, the insurance offices of James B. Drake, the department store of David T. Percy, and the Acadia Lodge of the Knights of Pythias among others.

At this time in the city, a lot of attention was focused on Bath Iron Works, building the battleship Georgia for the Navy from 1901 to 1906. Ralph Linwood Snow wrote in his history on BIW that the vessel sparked excitement. "It was a job that the local press wrote about in superlatives. The contract price of 3.59 million was the largest amount the company would receive for one ship until the mid-1930s, and she was the largest ship, 14,965 tons, built on the Kennebec until the 1960s." Georgia was launched on October 11, 1904 before some 20,000 onlookers, some who arrived via special trains and boats to see the "giant slide."