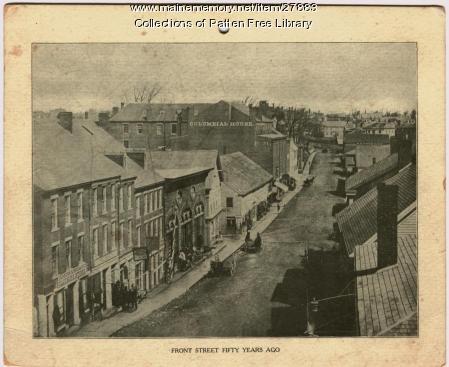 This early twentieth-century print of a mid-nineteenth-century photograph shows the northern end of Bath's central business district. In the right-hand corner, the building labeled "A.G. Page" provided the clue for dating the image. Albert G. Page had a grocery store here, according to the 1867 and 1871 city directories. By 1874 he had moved south on Front Street near the landmark Sagadahock House. The other structure of particular note, on this building-crowded Front Street, was the Columbia House in the upper center portion of the photograph.

Albert Gallatin Page (1817-1889) was born in Bath, the eldest son of Joshua Page, a well-loved, long-term schoolteacher in the Bath public school system. In his youth, A. G. Page went to sea for a year and then inland to Ohio for a year, but returned to his native town, according to Parker McCobb Reed's history of Bath. Mr. Page ran a grocery store at the time of this photograph and also served as the President of Bath National Bank. Later his business concerns concentrated on real estate and insurance. His obituary in the "Bath Daily Times" of January 1889 noted that Page's grocery store opposite the Columbia House was in business for some thirty years. Page also served in the City Council and as President of the Sagadahoc Historical Society.

The history of the Columbia House, Columbia House Block, and the Columbian Block is a tangle of buildings, theatres, and fires. The Columbia House and Block, according to the historian Henry Owen, was constructed in 1852 by Oliver Moses. In Owen's published history of 1936, he wrote that the "block contained stores beneath, and above these Columbian Hall at the north and the hotel at the south of the central stairway." The newspaper, "The Eastern Times," had a notice on June 21, 1855, that it had been three weeks since the opening of the Columbia Hall, with various dramatic productions and the musical presence of the Bath Brass Band. This block was destroyed by a fire in March of 1893, that apparently began around the theatre's stage according to the "Bath Daily Times" of March 30, 1893. At this later time the hotel was known as the Revere House. Heavy losses were sustained by the business owners in the first-floor stores, the guests in the hotels, and the company currently appearing in the theatre space. The property had remained in the hands of the Moses family and they decided immediately to rebuild. The prominent architect John Calvin Stevens was hired to design a new structure by March 31st. This new structure not only had a rebuilt theatre, but a grand new space for the Y.M.C.A. in the modest Romanesque structure. It did not include space for a hotel. In May of 1894, the new Columbia Theatre opened in the rebuilt block. In January of 1909, the theatre was once again closed because of extensive fire damage. In late May of 1913, the "completely altered and modernly equipped" theatre opened again, according to the "Bath Daily Times." But in October of 1937, the theatre of this block was once more gutted by fire. The exterior walls were saved, but substantial reconstruction was needed on the inside. The construction of the theatre, which included substantial fire walls, saved the rest of the block from complete destruction. In August of 1938, the theatre reopened again, this time known as the Uptown Theatre. This theatre continued until the late 1950s. The YMCA made several additions and modifications to the space the organization used for over 100 years, before a new structure was constructed in April of 2001 on Centre Street. The Columbian Block remains today as a vital space, anchoring the northern edge of Bath's central business district, with its initial storefronts and additional spaces adaptively reused as offices, apartments, and the Bath Skate Park.