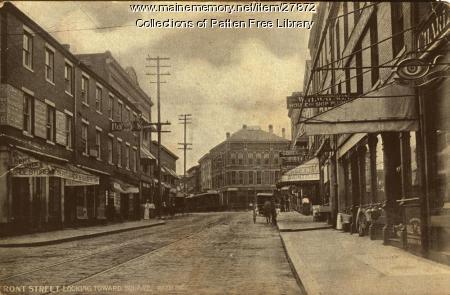 This postcard with its divided back appears to date from about 1907, the beginning of the period for such postcards. Bert Jack's Shoe Store on the left or east side of Front Street, as well as Jackson Clothing, the William H. Watson stove and plumbing store and the Harriman jewelry store on the west side of the street all appear in the 1907 Bath City Directory. By 1912, only the Harriman jewelry store is listed in the directory.

Addressed to a Mrs. George Kennerson, who is not in this directory or that of 1912, the message from Mildred to her "Mamma" noted that she was "well and having a good time." Mildred also wrote that she had already sent "Papa" two postcards, and then only had room for "Good by." The Kennersons lived in Woolwich in 1912 and were divorced in 1917. Given that daughter Mildred was born in 1904 or 1905, it is likely that this 1907 postcard was mailed around the time of the divorce when Mamma and Papa were living apart.

Of particular note in this postcard is the signage used by various merchants. On the left increasing space is taken by large signs, with numerous details about the opportunities inside are on the upper stories of the building. On the right, Charles A. Harriman's more traditional iconic sign of an eye and eyeglasses denotes the store of a business specializing in jewelry, watchmaking, and eyeglasses. Sixty years before in 1841, John Hayden, who once occupied this location, identified his store in his ads with the descriptions "at the sign of the Quadrant." Straight ahead on the Lincoln Block, between the second and third floors, the eagle, perhaps once a sign of a federal function, that once graced William King's Bank Block and Custom House on this same site, remained, a relict of an earlier time, and still looked over the intersection of Front and Centre Streets.