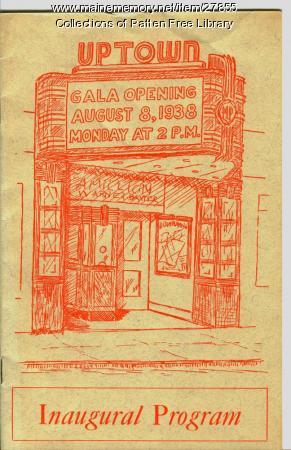 The Uptown was the last of the theatres housed on the Front-Street site of the Columbia Hall and Columbian Block. The 1937 fire was the last of a series of fires that damaged theatres in this spot, as detailed in several issues of "The Times of Bath, ME."

This particular fire swept through the Columbian Block, destroying the New Columbia Theatre and damaging a number of first-floor storefronts on Oct 15, 1937.

This eighteen-page brochure, full of ads from other local businesses and involved contractors, heralded the new theatre's opening in 1938.

The first theatre, the Columbia Hall and later known as the Columbian Opera House, was opened in the mid-nineteenth century, and was destroyed by a fire in 1893. The new structure, the Columbian Block, was designed by well-known architect John Calvin Stevens, with space for a theatre, the Y.M.C.A., and first-floor retail space. Although threatened again with destruction by the fire that consumed neighboring buildings in 1895, the structure was saved. In 1909, flames began in the area of the stage and destroyed the theatre while adjoining businesses were heavily damaged by smoke and fire. The theatre was not rebuilt for four years.

In 1913, the New Columbia Theatre opened. While aesthetic values were considered in the design of the new theatre, particular attention was paid to making the structure fireproof, according to the technology of the day. Also, as noted in "The Times of Bath, ME" articles by Kerry Nelson, "every morning the theatre was given a thorough deodorizing and fumigation with sprayers installed for that purpose. The system was approved by the best leaders of hygienics in the country." The theatre became inactive in the early 1930s.

In July of 1936, a new owner of the business, the M & P Theatres that owned some 90 theatres in New England, opened a refreshed and modernized Columbia Theatre. It was this theatre that was destroyed by the fire of 1937. The new 1938 Uptown Theatre, designed by John Calvin Stevens and his son John Howard Stevens, was named through a contest held by the "Bath Daily Times." Mildred H. Trott of Middle Street in Bath submitted the winning name, chosen for the entertainment venue's "uptown" location at the northern end of Bath's central business district. According to the inaugural program, opening week contained something for every one--a Mickey Rooney and Judy Garland film, a western entitled "Gun Law," a Three Stooges short, and a "Porky" cartoon. Although popular for many years, the theatre closed by 1959.