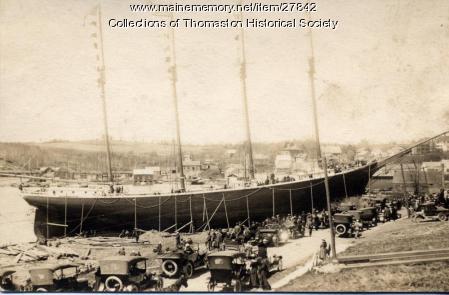 A large number of spectators have turned out for the launch of the schooner, parking their cars along Water Street. Launch days were exciting events, especially for the larger vessels. The huge vessels were not always guaranteed to launch without problems, and everyone wanted to be a witness. On more than one occasion, ships did not slip into the river as planned, tipping onto their sides. On one ship launch in the O'Brien yard, an anchor set into the hillside, dragged a huge furrow to the shore when the vessel was prematurely released.