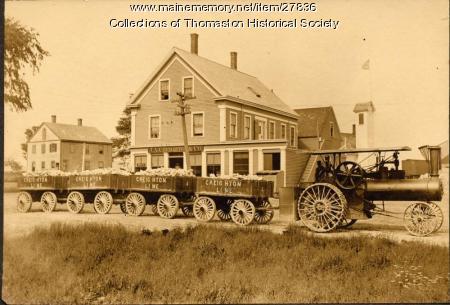 James A. Creighton and sons were involved in quarrying and the manufacture of lime in the last decade of the 19th century. Their large general store stood below the Knox and Lincoln railroad tracks near the intersection of Water and Knox Streets, in front of the Knox Engine Company. The firm also operated a grist mill to the south.

The firm owned horses and wagons to haul the rock from the Creighton quarries to the kilns at the bottom of Knox Street. Heavy duty tractors hauled wagons of rock after the turn of the twentieth century. The processed lime was shipped in casks to New York in the firm’s six vessels. The kilns had a capacity of 150,000 casks a year and manufactured about 600 casks/day.

This original store was destroyed by fire around 1928, caused by the overturning and explosion of an oil heater. Fire was noted by the engineer of the morning freight, whose repeated whistle blowing coincided with the sounding of the alarm by Adelbert Benner, watchman at the Black and Gay canning factory. Mr. John Upham and his family occupied the upstairs tenement at the time.

It was the home of the J.A. Creighton Co. for over 70 years. Charles A. Creighton, the present head of the firm, rebuilt the building right after the fire. The Creightons established their business in 1858, one of the famous early shipbuilding and limeburning firms of Thomaston.

The building on the left side of the photo was once a portion of Flint's Thomaston Grocery building, which stood on the site of the Watts Block at the southwest corner of Knox and Main Streets. It was moved to this location in 1890, when Samuel Watts built the original Watts Block.

The Knox Engine Company hose tower can be seen on the right.