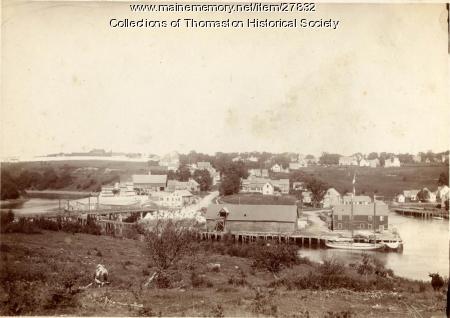 This view from the top of Brooklyn Heights looks across the Georges River to Hyler Street and Old County Road or Main Street on the far horizon. The Maine State Prison appears on the horizon on the left side.

In the middle of the image sits the former Dunn and Elliot coal shed. On the left side of the image are the old Burgess O'Brien lime kilns. The Dunn and Elliot store is the cape-style white building fronting on Wadsworth Street that leads up the hill. It was in this location, or on the small rise directly across the street, where the first trading post was built in 1630.

The hill has also been known as Watson's Point and Brown's Hill. The name of Brooklyn Heights came from the days of the famed shipbuilding firm of Chapman and Flint. In 1837 Captain James Chapman and Benjamin Flint organized the shipbuilding firm of Chapman and Flint, and established a shipyard on the north side of the Georges River, below and to the west of the Maine State Prison. They were in business here until 1871, when the Knox and Lincoln railroad was built and cut off access to the river. After this, they moved to New York.

Both Chapman and Flint had lots in Brooklyn Heights, New York, and with Thomaston millionaire, Edward O'Brien, the three built a block of houses on one side of Montague Terrace in 1864. It is through this connection that Thomaston has a "Brooklyn Heights."