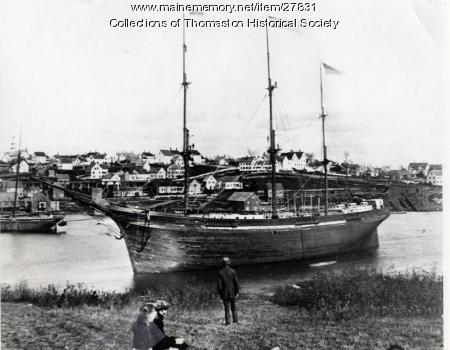 The three-masted full rigged ship Frank F. Curling, 2200 tons, was built by Edward O'Brien for her first captain, Frank F. Curling, and was said to have been one of the largest ships ever built in the town. Note the strip of clear varnished planks just down from the deck, a trademark of O'Brien's fleet. Fairburn reports the vessel sank when only eight months old because of "bad luck and ill health of her officers."

The picture is taken from the O'Brien shipyard on the west side of the Georges River at the base of Brooklyn Heights. Houses along Water, Elliot and Dunn Streets can be seen in the distance.