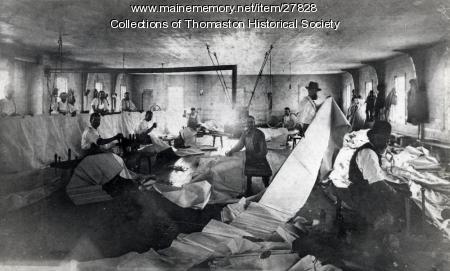 This is an interior view of the Dunn and Elliot (D&E) sail loft on the Water Street waterfront in Thomaston.

The sail-making business was moved to this loft, which was built around 1875 at the base of Green Street. Massive ship's knees along the side walls support the third floor above. Note the stove, which is suspended from the ceiling by cables to allow sail fabric to be laid out on the floor below.

The sail loft was originally part of the Burgess & O'Brien shipyard and General Store near the base of Wadsworth Street. The business was taken over by D&E in 1864 and continued until the five-masted schooner Edna Hoyt was launched in 1920.

In September 1965, when remaining family members sold the loft, an auction was held in which the contents of the building were sold. Sail plans of various vessels built by D&E, sail makers' benches, half hulls, tackle blocks, yardarm rings, signal flags, sail plans and various sail-making tools and equipment were purchased by people from all over the country.