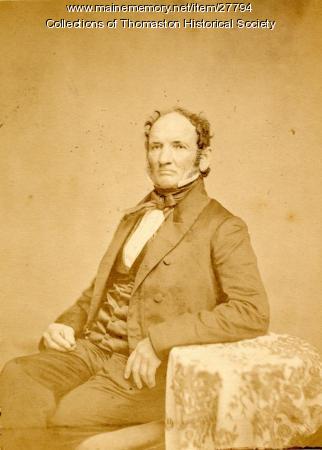 The house is impressive in size and refinement of detail not only on the exterior but throughout the interior as well. Four large rooms on each floor flank a central hall, and an ell extends from the back of the house. The entry, decorated with pilasters and keystoned arches, features a window surround with unusual glass pattern. The interior doorways have graceful proportions and are surrounded with elegant moldings. Some of the mantels are of the coveted Thomaston marble, exports of which generated an annual revenue of some $20-$30,000 during this period.

He was Speaker of the House of Representatives from 1825-29 and again in 1831-32. He served as a United States Senator from 1834 - 1840. He initiated legislation in 1836 that created the Patent Office and held the first patent, thus earning him the moniker of “Father of the U.S. Patent Office.” U.S. Patent Number One is his invention for a traction wheel used in locomotive steam engines. He was also judge of the Maine Supreme Court and was long one of Thomaston’s most prominent citizens.

Following his defeat for reelection, he returned to Thomaston, where he resumed his law career, made several other inventions, and was widely known as a writer and a powerful orator.

He died in Thomaston, Maine, on June 20, 1874 and is buried in Elm Grove Cemetery, not far from his home.