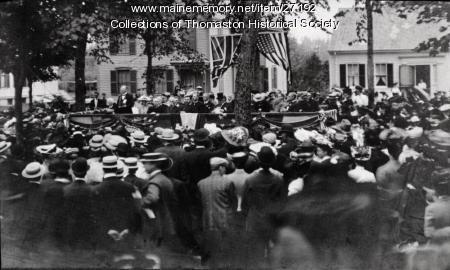 In 1905 a huge bicentennial ceremony commemorating English navigator Captain George Waymouth's arrival in Thomaston was held at the Mall on West Main Street.

On July 6, 1905, the Maine Historical Society, along with the Thomaston Historical Society and bordering river historical societies, celebrated the 300th anniversary of his arrival. Over two thousand people were in attendance. The Cutter Woodbury, Steamers Castine, W. G. Butman and Bristol led a number of smaller craft on an excursion to Pentecost Harbor at Allen Island at the mouth of the Georges River (or St. George River). It is believed this is where Waymouth anchored with his ship Archangel and erected a cross on Allen Island. A granite cross was unveiled, a flag raised and a 21-gun salute was fired by the Arkansas. The procession returned to the town landing, whereupon another salute was made at the site where it is believed a second cross was erected. A procession formed to march up Knox Street to the town Mall, accompanied by a band and 125 school children. Ceremonies were held at the Mall, a small green on Main Street, where a memorial boulder was unveiled, and various events took place throughout the afternoon and into the evening.

The houses seen in the background of the photo are #159 and #157 Main Street Mall.