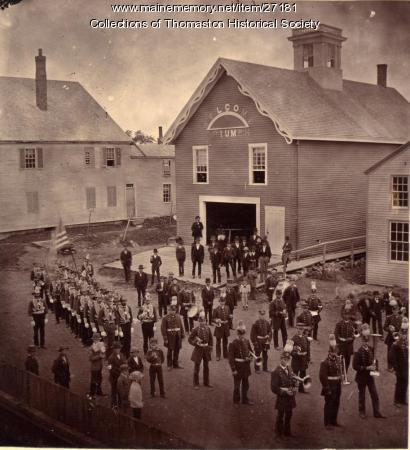 In 1855 an elegant engine called Eureka No. 4 was purchased by the town for which $1200 had been raised. A house was built on Starr Street, and a company formed at the Lower Corner (corner of Knox and Main & Beechwood). Col. George Starr was foreman. After his death, his brother-in-law, Elisha Fales, became foreman.

In 1856 The members of the company erected a flagpole at the junction of Knox and Main Streets.

In 1878 the flagstaff of the Eureka Engine Co. at the head of Knox Street was taken down by Mr. Thomas W. Dunn, when it was discovered the mast was badly rotted. A new flag staff was made by Sampson and Trowbridge, which replaced the one removed.

The new flagpole was dedicated in October 1878 assisted by the Eureka Co and the Thomaston Cornet Band. The Eurekas headed by the band escorted the W.W. Rice Company down to the Counce Hall, and the firemen all marched up to the Corner.

After the big Main Street fire of June 6, 1915, when Watts Hall, the Telegraph Block, Knox Hotel and Catland’s Stable went up in flames, it was agreed that the town must have more up-to-date fire fighting equipment. Dr. G. L. Crockett procured the fire engine. The old Eureka No. 4 was sold to George Starrett, who junked it.

Dances were held in the large hall on the second floor of the Eureka Hall. In due time, Our Own Hook and Ladder Co was formed and shared the hall with the Eurekas.