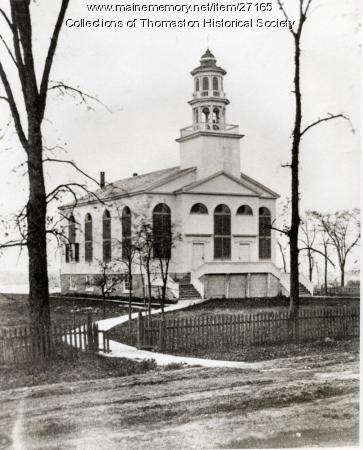 On 3 Oct 1826, the following deed was written: "I, Benjamin Bussey, in consideration of my regard for our holy religion, my interest in the support of moral institution and my desire for the prosperity of the town of Thomaston quitclaim to the proprietors of the new meeting house in Thomaston for the purpose of a site for the erection of a house to be dedicated to the worship of God and known as the first Congregational Society the following described lot: Beginning at stake and stones on the south side of the county road at the corner of said road and a street newly laid out from said road;
Thence south 3° east by said newly laid out street 300’ to a stake and stone at another newly laid out street;
Thence east 3° north from said last mentioned street 200’ to stake and stones;
Thence north 3° west on said Bussey’s land 300’ to said county road
Thence west by said county road 100’ to the bounds first mentioned, containing one acre more or less according to the plans made by John Gleason, Esq.

No other building but a meeting house is to be erected on the premises."

This lot was at the corner of Robinson and East Main Streets (Route One), west of the Thomaston Academy. In the 1820s, the church was sold to the Catholics. The steeple was removed and the building was razed in 1916. St. James Catholic Church, built immediately after the old church was taken down, still stands on this site.