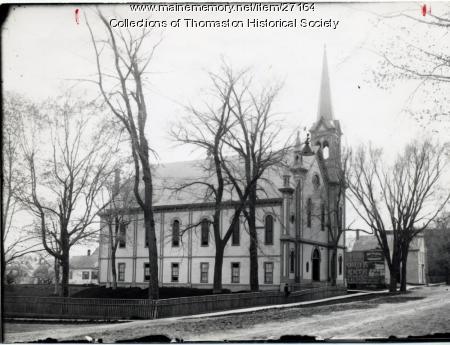 In 1849 the Unitarian Society was formed by those who had been members of the Universalist Church because their new pastor, the Rev. O. J. Fernald, wished to retain his Unitarian Church connection. He preached until his death in April 1861 at the Thorndike Hotel in Rockland, being taken there after becoming sick on the Boston steamboat. The Universalist Church stood on this site until 1871 at which time the Orthodox Congregational Church bought the lot and removed the existing church.

On December 29, 1871, the Rockland Gazette reported: "The new Congregational House of Worship has been closed in and painted and makes an impressive show upon the street. The spire is very neat and graceful and all the intended arrangements for religious services are in good taste. They have had the best architect in the state, Mr. F. H. Fossett, of Portland."

The Rev. J. K. Mason was pastor at the time. After Rev. Sumner Sargent left, the church was closed until Mr. Strout, a former pastor then in retirement, came to Thomaston and reopened the church. Partly through his efforts, the Congregationalists and Methodists formed a federation. This church was used summers and the Methodist Church on Hyler Street was used in cold weather.

The property was sold in 1943 to the Pentecostal Society, and the church was later demolished. A short street in this vicinity is named Congo Street.