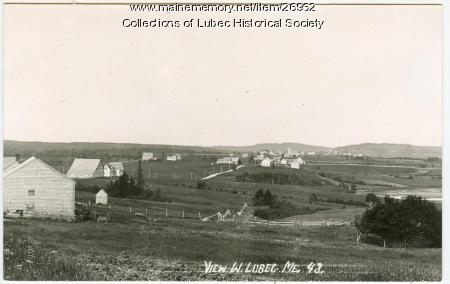 An active farming area from the 19th through much of the 20th Century, West Lubec lies about five miles from Lubec Village on the coast. Th descriptive information here was written by West Lubec native Bernard Ross: “There appear to be no power poles, just telephone poles, and the road is unpaved gravel. The barn in the near distance next to the white house bears a ‘Furniture’ sign, possibly an advertisment. The house burned ca. 1930. The farm was known in the 1930s as the Elijah Kelley place and his son Kelsey Kelley lived there until his death ca. 1980. The stream known locally as Kelsey Kelley Creek runs through the depression. The next house up the hill is the Horace Kelley place. When Horace bought it he had the house turned about one quarter turn and built a new cellar under it. The barn was torn down in later years, but as of 2009 the house still stands. To the left of that house the house and barn back in the fields were known as the Frank and Susie Whalen place. It was later owned by Carlton Corey who built his automobile repair garage near the road, later operated by Randy Hall.
Back across the road from the Horace Kelley place is the Ramsdell place. Walter and his wife Tillie lived their lifetimes there. In line with the back of the house and just beyond is the Robert Ramsdell place with an attached dance hall extending to the right. The next house on the left side of the road is the Basley house, and next is the Vernard and Varna Leighton house with the barn to its left and the carriage house to the left of that. Next on the opposite side of the road is the Card place, later McLellan place, with barn. The next is the West Lubec Methodist Church. After the State acquired a 100 foot road right of way for Route 189, the church facade was within that boundary, which eventually resulted in a new building. The next house beyond the church is the Bradbury place then next and a little more to the right is the steam powered saw mill.”