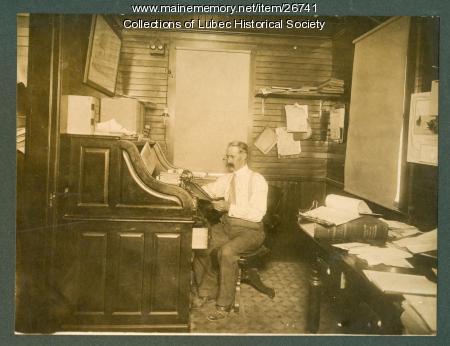 Robert James Peacock in the Dewey office of the Lubec Sardine Co. The wall calendar shows July 1911.
Robert Peacock (Oct 19,1863-March 22, 1933) was treasurer and a partner in the business with Bion Moses Pike, C. L. Pike, and J. C. Pike. Peacock later served as president of the Lubec Trust and Banking Company and also served on the Lubec school board and as a selectman. As a Republican he was a member of the Maine House in 1905 and 1907, and the Maine Senate from 1915 to 1921. Peacock was great-grandfather of Robert “Bob” James Peacock II who became head of the Peacock firm in Lubec in 1988.
The Dewey was one of four company plants. The others were at Haddock Point, North Lubec (known as "Acre," short for "Hell's Half Acre"), and on Johnson Street, later the Booth factory. This plant was named for Admiral George Dewey, popular hero of the Spanish-American War.
Use of the zoom tool reveals that the heavy volume on the table is a book of credit ratings. The spine reads, "R. G. Dun & Co. Reference Book July 1911." In 1933 Dun merged with Bradstreet.