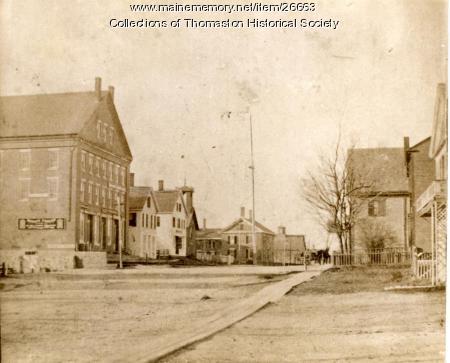 On May 7, 1823 Limestone Hill was selected as the site for the state prison. The property, consisting of ten acres of land, including the quarry of limestone used by the first proprietor and his successors, Wheaton, Knox and others, was purchased from Gov. William King for $3000. The prison was built in 1824 at which time the intersection of Main and Wadsworth Streets became known as Prison Corner or Upper Corner.

Edward O’Brien and Benjamin Carr built the Carr and O’Brien Block on the corner as the home of the Georges Bank, founded with 115 stockholders, Edward O’Brien its president. Edward O'Brien was a successful businessman and shipbuilder. Carr had come from Palermo 10 years earlier to be warden of Maine State Prison. The building now serves as a showroom for the prison, which has been relocated to Warren.

The Warden's brick house is in the center of the picture. This was later destroyed by fire.