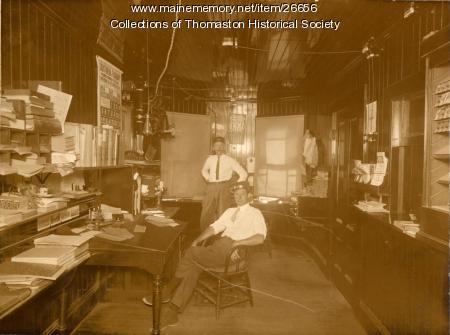 Pictured are Charles Starret, sitting, and Gilbert Beattie, standing, in the office of the Thomaston stationmaster for the Knox and Lincoln Railroad.

In 1871 when the Knox and Lincoln Railroad was built through Thomaston, the decision was made to keep the General Knox Farmhouse for use as a train depot. It was modified throughout the years for this use.

When the railroad company departed in 1956, the Daughters of the American Revolution took over the building, turning it over to the Thomaston Historical Society in 1971. All remnants of the railroad station have since been removed.