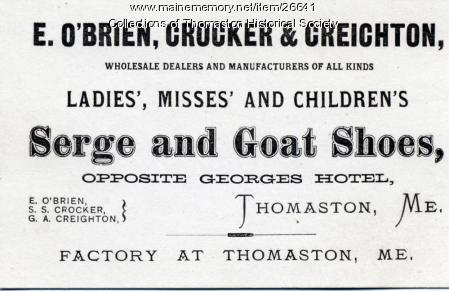 In 1871 Edward O’Brien, S. S. Crocker and G. A. Creighton set up a boot and shoe factory in the Carr O’Brien Block at the Upper Corner (corner of Main and Wadsworth Streets). One hundred fifty workers were employed in the business. It was not a profitable business but at the time, was established as a source of employment for unemployed residents. It was his hope to give employment and thus prevent many desirable citizens from moving away from Thomaston. The shoe factory was in operation a little more than two years. O'Brien's nephew, E. E. O'Brien closed the business, which had lost about $40,000. It is said he later told a friend he was "glad he had started that shoe factory after all, for if he hadn't, he might have died without finding out what a big fool he was."

O’Brien also built a large tenant house on the corner of George's and North Street for employee housing.