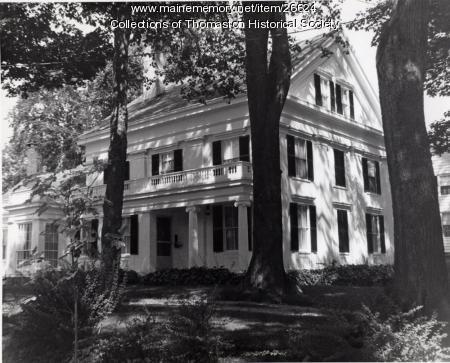 This classic Greek Revival example was built in the 1840s by Captain Charles Ranlett, (1816-1917), a Thomaston shipbuilder. While known as the Captain Ranlett House, it is also called the Gould House after subsequent owners, Honorable A. P. Gould and Albert T. Gould.

During the Goulds’ ownership, a room in the house was decorated with artwork executed by a French artist, who copied a design found in an English castle.

Captain Ranlett built the 654 ton Bark Sunbeam, the first vessel built with wire rigging in Thomaston. In 1864 he departed in company with his second wife, Ann Maria Jordan, and two children on a circumnavigation. Ranlett captained the first Thomaston vessel to circumnavigate the globe.

After returning to Boston the following year, he sold the Sunbeam to his brother-in-law, Captain Sam Jordan.