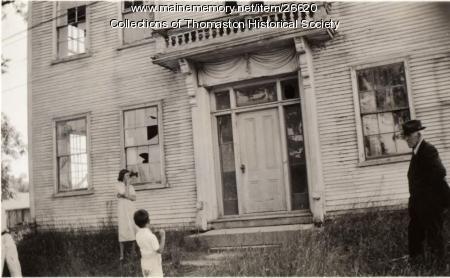 This close-up view shows an Adam style of detail with sidelights on the entry door of the Monk Hatch House on Wadsworth Street. Also known as the Humphrey Hatch House, it was built by Howland Rogers in 1796 for General Henry Knox. Over the years it was owned by William Pope, Robinson Monk, Nathan Hatch, and Henry B. Humphrey, explaining the different names.

George Gilchrist bought the house in 1918 and used it as a barracks for the soldiers, who guarded the shipyard where vessels were being built for the government during the first World War.

The property was sold to Dr. Allyne Peabody in 1926. Dr. Peabody hoped to restore the building to its former splendor as a memorial to its first owner, General Knox. However, he did not receive the hoped for cooperation and in 1939, he sold it to Alvah Smith. It was so badly deteriorated, Smith took it down, selling bits and pieces of the building as souvenirs. It is reported that he finished the ell into a residence, where he and Mrs. Smith made their home.