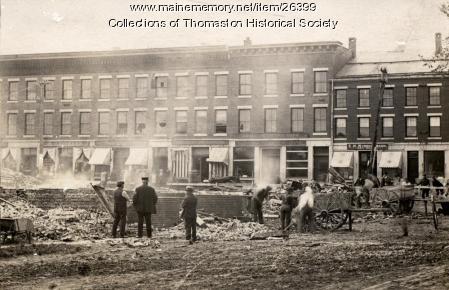 In a note on the back of this post card view is written: “This card shows how hot the fire was. Town meeting tomorrow night to see about building Watts Block.”

On June 6, 1915 a fire destroyed nearly the entire business district on the south side of Main Street and left the town without a town hall or hotel. Destroyed were five buildings between Knox Street and St. John’s Episcopal Church…the brick Watts Block, the wooden Telegraph Block and the two wooden buildings that formed the Knox Hotel and its stable behind.

The fire started in the livery stable kept by the late Wm. Catland. No lights were on and the cause of the fire was unknown. Mr. Catland believed that it was of incendiary origin. When the late Orville Young, the night man, became aware of the fire, it had a good start. It raged for four hours and the loss was estimated at $97,350.00 with $59,350.00 insurance. The ten horses in the stable were liberated without injury.

The flames soon spread to the hotel and the Telegraph Block and from the latter to the Watts Block. The Courier Gazette on the following Tuesday stated that Town Clerk Lewis Hanley, E. S. Stearns, Selectman Robert Walsh and Alton Grover helped move the town records with help from Richard O. Elliot and Maynard Spear. The town records, back to the first town meeting in 1777, were saved. Some plans and papers were lost or burned but the town was fortunate to have saved most records.

The Watts Block was built and presented to the Town of Thomaston by prominent shipbuilder Captain Samuel Watts in 1890. Insurance monies plus a donation from Watt’s daughter allowed the town to immediately rebuild a new block, which still stands today on the southwest corner of Knox and Main streets.