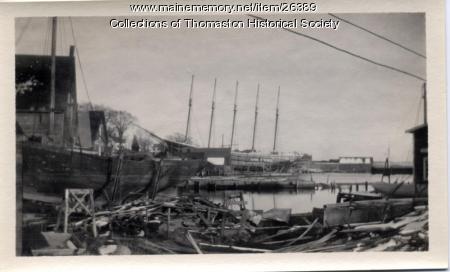 Built by Dunn & Elliot in 1920, the five-masted schooner Edna Hoyt, 1512 tons, was built at a cost of $280,000 and launched in Thomaston, Maine on December 11, 1920. At 284 feet long, she was one of the largest and the last of the old windjammers constructed in Thomaston, and perhaps, the last five-master of her kind to be launched in the world. Captain Elmer Beal was her first master.

In her 17 years of voyages, the Hoyt had carried everything from fertilizer, molasses, coal and pilings to points all over the world.

In August 1937 she sailed with a cargo of salt from Barbados to Halifax, where she loaded lumber for England. From there she departed in November to carry Welsh coal back to Barbados but encountered a gale in the Bay of Biscay. After three weeks of battering, she suffered extensive damage and was towed into Lisbon, Portugal, where Captain George A. Hopkins was forced to sell her. She ended her days as a floating coal barge.

The photo is taken from the former Morse Boatbuilding Shop, now the site of Epifanes, on Water Street in Thomaston. The third building in from the left is the red Dunn and Elliot sail loft, which still stands on Water Street.