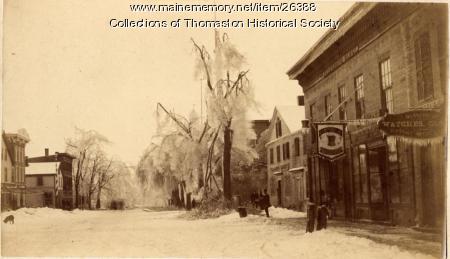 "Early in the month (March) a snowstorm accompanied by gales of hurricane force wrought fearful havoc to shipping all along the coast. On Wednesday the 29th occurred one of the worst sleet storms in the annals of our town’s history.

"Thursday morning the trees were covered with ice, that afternoon the branches began to break down and in the evening the boughs bent nearly to the ground and it was dangerous to walk up and down the street near the trees. This disastrous condition continued through the night all through Friday and Saturday, when late at night came a snowstorm covering the iced branches.

"The loss of fallen branches is estimated at over 30 cords of boughs and limbs. The beautiful maples near Isaac Mathews house are destroyed. The stately Linden trees in front of Capt Wm Burgess’ house are wholly bereft of their former beauty. A thrifty ash tree near the house of Nicholas Lenfest was broken to the ground.

"The large maple, which the late Dr. Ludwig hauled from Beechwoods and set up and watched through his later years, is badly broken and marred.

"Business in town was suspended from Thursday to Monday. Falling branches broke two headstones at the cemetery. Saturday evening a fire was built under the middle tree in front of the Levensaler Block, thawing off the ice and saving the tree from destruction." (taken from an unnamed newspaper account.)