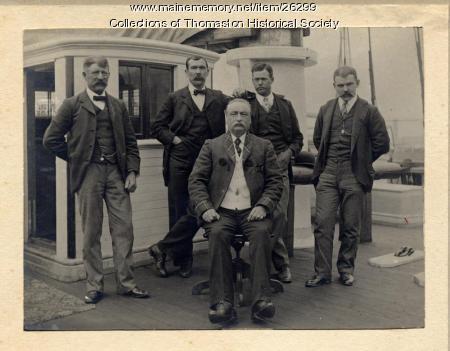 The men shown here with Captain William Lermond of Thomaston are not designated by name by Aubigne Lermond Packard in her book, “A Town that Went to Sea” (Falmouth Publishing House), but as might be surmised, they are officers serving under Captain Lermond, presumably on the Joseph B. Thomas, of which he was part owner and master. Thanks to his wise command for a quarter of a century, Joseph B. Thomas, often called J. B. Thomas, was known as a “happy ship.” She was named for a prominent Boston merchant and launched from Samuel Watts boatyard in Thomaston, Oct 25, 1881. She was 234' x 42' x 27' and registered 1851 tons. Captain William J. Lermond was her captain, who had been mate and then captain of the Samuel Watts. From 1894 to 1899, she carried case oil in trade with the Far East.