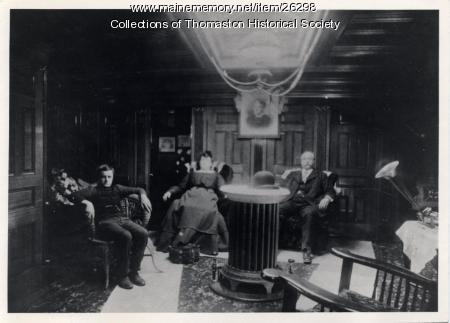 Captain William J. Lermond, his wife Hattie May Winchenbach, and his 16-year old son, Bowdoin, sit in an elaborate Victorian setting aboard the Washington B. Thomas, a schooner under the captain's command in 1903.

Since a captain often took his wife and family with him on long passages, his private quarters often contained elaborate furnishings and portraits from his home.

The Washington B. Thomas, 2639 tons, was built by Washburn Brothers and was launched April 11, 1903 in Thomaston. She was principally owned by builders and brothers, Edward, Charles, William, Francis and George Washburn and was the first five-masted schooner from Thomaston.

Just two months after her launching, on a return passage from Norfolk, Virginia, loaded with coal bound for Portland, the schooner was wrecked off Portland on June 14, 1903.

She had been unable to obtain a pilot to navigate into the safety of the harbor due to a strong northeasterly gale. While anchored off, she dragged and went ashore off Prout’s Neck, and the captain’s young wife of less than a year was lost, as as the son of the first mate.