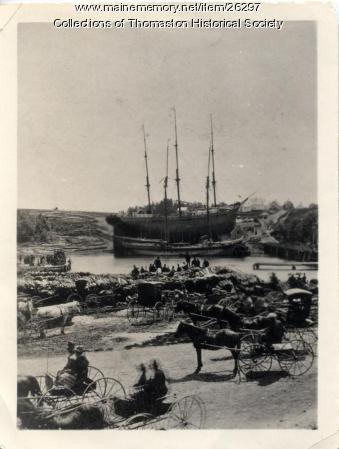 The three-masted Down Easter Baring Brothers, 2166 tons, was named for the London merchant bankers with whom many American ship owners had an account. In 1889 she was deliberately set on fire by dissatisfied seamen.

She was launched from the O’Brien shipyard in 1877. In this image, her bow points southwest toward Brooklyn Heights on the road to Cushing.

The old lower toll bridge lies in the right center of the image with Water Street in the foreground. The picture is taken from the north side of the St. George River on the site of the present Lyman Morse Boatyard.

Two of the Baring Brother’s captains were Captain E. Thorndike and Captain Ed Masters. She was a distinctive and easily recognizable ship for when Captain Ed Masters took over as master, he painted the entire ship with tar to eliminate the expense of maintaining a coat of white paint.

The Down Easter was built for rough trade passages between the east and west coasts. Their design called for larger, deeper hulls and fewer sails as compared to the clipper ships, which preceded them.

Profits were measured by fast passages as well as increased cargo capacity.

Shipbuilders Edward O’Brien and Sam Watts were well known in the days of the Down Easter trade.