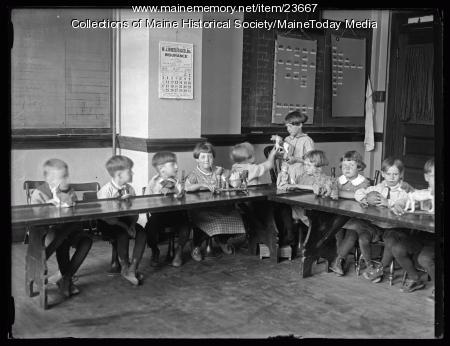 A primary class at the Maine School of the Deaf (later known as the Governor Baxter School for the Deaf) during what appears to be the 1925 version of "Show and Tell."

The school, founded in 1894, was located at 85 Spring St. in downtown Portland. Thomas Hill, former president of Harvard College, founded the school along with Frederick Fox, a Portland lawyer.

Since 2001, it is known as the Maine Educational Center for the Deaf and Hard of Hearing. The building on Mackworth Island however, is still legally called the Governor Baxter School for the Deaf.