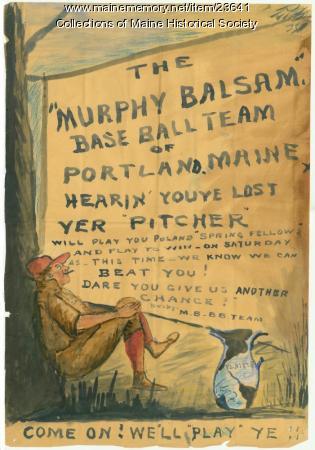 A hand-drawn and hand-painted invitation from the "Murphy Balsam" baseball team of Portland challenges the Poland Spring team to a baseball game.

The invitation notes that the Poland Spring team has lost its "pitcher." The Poland Spring newspaper, the Hill-Top, reported that pitcher Ralph Plaisted and two teammates left the team on July 30, alluding to reasons such as defection to another team and drunkenness.

"Plaiste" is written on a drawing of a ceramic pitcher. The invitation was in the collection of Ralph Plaisted, a Bowdoin College graduate and a lawyer.