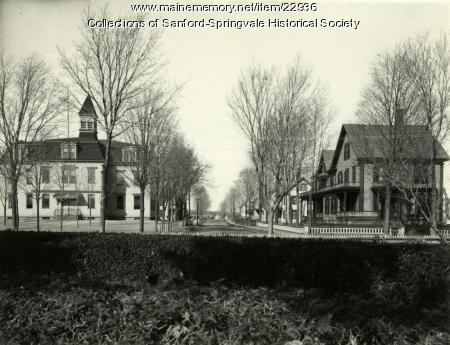 In 1887 Ernest Goodall put up the funds for a high school in Sanford and in 1888 the Longfellow School opened, which provided a home for Sanford's new high school as well as space for the lower grades.

The Longfellow School served as Sanford's high school until the Emerson School was built in 1902. Thereafter, it was a grammar school only. The building was demolished in June 1971.

The house on the right of the photograph was once the home of George B. Goodall. In 1917, Dr. H. Danforth Ross converted it into a hospital, known as Ross Hospital. It continued as a hospital until the Henrietta D. Goodall Hospital, built by George B. Goodall and his daughter, Mrs. William H. Marland, as a memorial to their wife and mother, opened in 1928.

The Sanford Post Office, completed in 1933, now occupies the site of the George Goodall home.