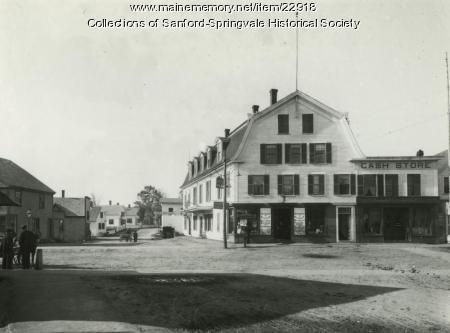 This hotel stood at the corner of Main and Oak Streets where Key Bank was later situated. Erected sometime between 1864 and 1867 by Samuel D. Tebbets. Tebbets operated the hotel until 1887 when the Brown family took it over and ran it as Hotel Brown for the next six years. Thereafter, until its destruction in the 1905 fire, the building was at times a hotel and at times a rooming house.

The first occupant of the corner store was Albert Cooler, Springvale's first druggist. It was Byron Moulton's Pharmacy when this photograph was taken. Allen and Emery, dry goods purveyors, occupied the ground floor under the "Cash Store" sign. The sign on Oak Street at the end of the hotel reads "Livery and Feed Stable."