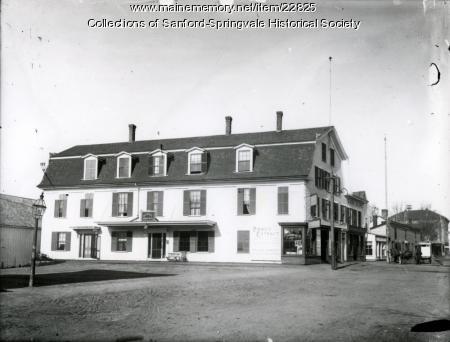 The old Tebbets Hotel on the corner, now with a gambrel roof, was taken over in 1887 by the Brown family who operated the business for the next six years as Hotel Brown. Thereafter, until it burned in 1905, the building was at times a hotel and at times a rooming house. Dr. Byron M. Moulton, owner of the drugstore in this photograph, decided in his youth to become a doctor. Lacking funds he clerked in this store, then owned by George W. Shaw, and at the same time studied medicine with Springvale physician Ira C. Sawyer. With his savings he went to Baltimore to study at the College of Physicians and Surgeons. Returning to Springvale about 1890 he bought out his former employer with the help of George C. Roberts. The two ran the pharmacy as Roberts and Moulton until Moulton purchased his partner's share nine months later. Income from the business enabled Moulton to return to Baltimore where he graduated from the College of Physicians ans Surgeons in 1894. He immediately opened his medical practice in Springvale and sold his pharmacy the following year to W. H. Wood. Dr. Moulton's success story was crowned in 1914 when he opened the first hospital in the town of Sanford. It was located in the Springvale National Bank building (now Key Bank) built in 1913/14 on the site of this hotel. Allen and Emery, whose sign appears above the Main Street shop, sold dry goods. Harmon G. Allen became sole owner in 1892 and continued the business for more than half-a-century.