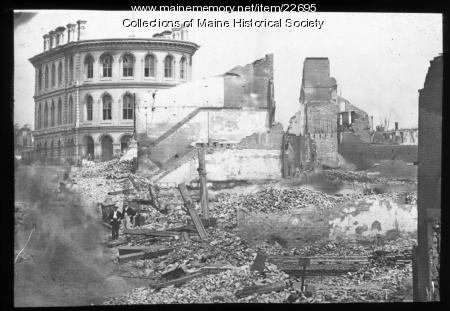 A view of the ruins at Middle and Exchange Streets in Portland, including the U.S. Custom House at back left, after the Great Fire of July 4, 1866.

The custom house, which also served as a U.S. Post Office, was designed by architect Ammi Young in 1855 and was believed to have been fireproof. The building was damaged beyond repair and later leveled. This iteration of Portland's U.S. Custom House was short lived. It was built immediately after a fire destroyed a previous custom house, located in the Merchant Exchange building, in 1854.

The image pictured here is a ca. 1900 lantern slide reproduction of an earlier photograph.